Finally, the results you've all been waiting for!

I've had students, fellow MVPs, Aussies and New Zealanders alike ask for the per capita medal rankings for the Olympics. Ask and you shall receive.

For this data, I've merged the population data from Wikipedia into the OlympicTeams table and calculated the Medals per 1 Million people for each country.

Happy to say that it's an extraordinary year for New Zealand - we're ranked number 2 per capita in Gold First medal rankings. I've also replaced the United States with Australia in this per capita page as we have to keep the trans-Tasman rivalry alive and well. Australia you have some catching up to do - NZ have more than double the per capita medals with 2.93 to Australia's 1.39 as of now. 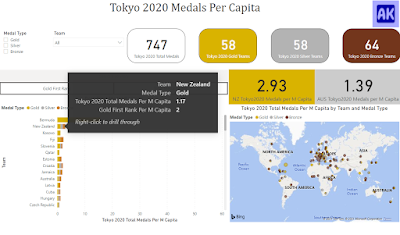 Keep up to date with the live results in the report below (per capita is page 2).

Allison Kennedy
I am a Microsoft Power BI MVP and Certified Professional in BI Reporting. These are just fancy titles that mean I love Power BI, Excel, solving puzzles and number crunching so much that I've been recognized as a technical expert and leader in my field. Most of all I love learning and teaching. Data and numbers are generated by people, by YOU. I love sharing my passion and knowledge to help you make sense of your data more quickly and easily.